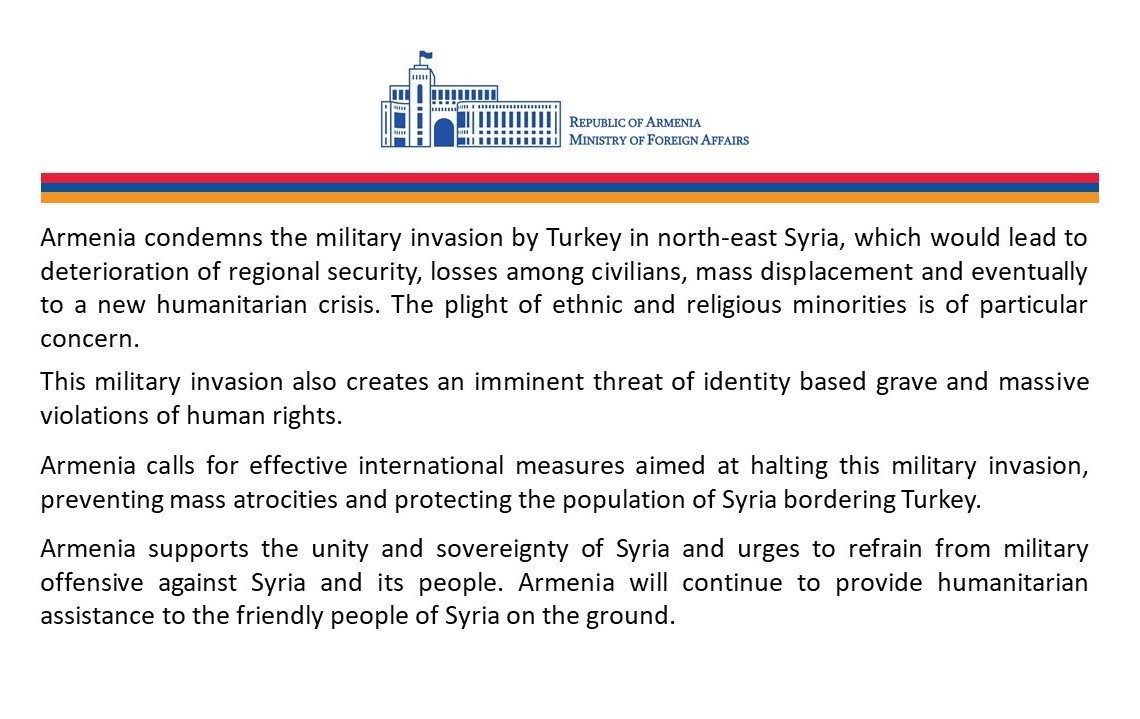 The diplomatic mission of Armenia in Syria is prepared to organize an urgent evacuation of compatriots from settlements under fire
Armenia condemns the Turkish troops’ invasion of Syria, according to a message from the Ministry of Foreign Affairs of Armenia. The Prime Minister also called on the international community to take every measure to stop the Turkish invasion.

Armenia’s humanitarian mission in Syria continues, with Armenian doctors and engineers fulfilling their daily responsibilities.
Armenia’s diplomatic mission in Syria has organised an urgent evacuation of compatriots in the line of fire, especially from the cities of Tel Abyad and Kamyshly.
Turkey launched a military operation in northeast Syria to create a ‘safe zone’ along its borders. The attack hit more than 200 targets using heavy weapons, including aircraft and artillery. Washington said it would not obstruct the Turkish military, and began to withdraw its troops from this territory. In this situation, an escalation of the conflict between Turkey and the Syrian Kurds, who now control the northeast of Syria, now poses a real threat.
• Syria as the way out

The MFA stated:
“This invasion will lead to a further deterioration of regional security, as well as civilian casualties, a large flow of displaced people and, ultimately, a new humanitarian crisis.”
This military invasion, according to the MFA’s statement, creates the conditions for severe and large-scale human rights violations against another ethnic group.
“Armenia calls for effective international efforts to end this military invasion, prevent mass atrocities and protect the Syrian population on the border of Turkey.”
In addition, that statement reiterated Yerevan’s continued humanitarian assistance to the Syrian people.

Yerevan has delivered humanitarian assistance to Damascus since the start of the war. The assistance is for civilians suffering from the fighting.
Armenia has emphasised that its presence in Syria is one of peacebuilding only through humanitarian activities.
“Assistance will be provided exclusively outside the combat zone. Armenian specialists will carry out humanitarian activities such as clearing mines and educating local people about the mines, as well as the provision of medical care in Aleppo.”— declared Armenia’s press secretary for the Ministry of Defense, Artsrun Hovhannisyan .
PM Nikol Pashinyan also declared that Armenian specialists will not be placed in combat:
“This is an exclusively humanitarian programme and has no military significance. We intend to implement this programme with what is possible in the country’s budget. All costs are included in the draft budget for 2019.”
After the completion of the active phase of hostilities in Syria in February 2019, Armenia sent a humanitarian mission there. There is a group of engineers and doctors – 83 people in total.

Armenia’s condemnation of the invasion of Turkish troops in the territory of Syria was announced on 10 October by the Prime Minister of Armenia:
“We are concerned about the situation, since, according to our research, such actions will further deepen the humanitarian crisis in Syria.”
Pashinyan believes that the international community needs to take steps to stop the illegal Turkish invasion and protect Syrian citizens living along the border with Turkey, including national minorities.
“In this context, I want to note that Armenia in Aleppo (Syria) is implementing a successful humanitarian mission, and we will continue to do so,” Pashinyan reiterated.
The continuation of the humanitarian mission was also confirmed by Nazeli Elbakyan, who is responsible for public relations at the Centre for Humanitarian Demining and Expertise:
“I spoke with the head of the humanitarian mission in Syria. The mission operates as usual … The mission has not received any other instructions. Armenian doctors and engineers continue their daily work in Aleppo.”

What is the government doing?

Armenia’s government decided that citizens of Syria, Lebanon and Iraq could receive Armenian citizenship in their respective countries.
Deputy Foreign Minister of Armenia Avet Adonts explained that in 2012, the government made a similar decision, and citizens of Syria, Lebanon and Iraq could obtain citizenship and passports in the embassies or consulates of Armenia in these countries. However, that policy was only in place until 31 December 2018. Adonts noted that:
“Given the internal situation and the tension in these countries, it is necessary to extend this decision so that citizens of these countries can obtain Armenian passports at the embassies and consulates of their countries through 31 December 2019.”

Consequences of Turkey’s invasion of Syria

On 10 October, according to Syrian media agency Sana, eight civilians, including women and children, were killed and 20 injured in shelling.
Information became available about the Armenians who live in settlements affected by the shelling of Turkish troops.
The head of the parliamentary commission on education, science, culture, youth and sports, Mkhitar Hayrapetyan, shared information on his Facebook page.
Referring to Armenia’s Chief Consular in Syria, Armen Sargsyan, Mkhitaryan said that the Armenian mission in Syria is prepared to organise an urgent evacuation of compatriots.
“About 16 Armenian families were shelled by Turkish troops in the city of Tel Abyad in northern Syria … In addition, the city of Kamyshli, where there are also many Armenians, is also under fire,” Mkhitaryan wrote.
Later, it turned out that 13 out of 16 families had already left Tel Abyad, while the Kamyshli Armenians — more than 400 families — had not yet agreed to leave their homes.